There is significant support for a UN Treaty on plastic pollution with 161 countries supporting a new global agreement.1 This will be discussed at the next UN Environment Assembly (UNEA 5.2) at the end of this month. Although 23 brand owners and retailers signed a manifesto in support a global treaty, 19 of the top 20 plastic producers were absent. It’s a similar picture for financial institutions; 28 of them joined the call for action, but there is a glaring absence of the largest global asset managers.

The resumed Fifth Session of the United Nations Environment Assembly (UNEA-5.2) takes place online and in person in Nairobi from 28 February to 2 March 2022, where representatives from 193 countries are expected to attend.2 Although the theme of the Assembly is ‘Strengthening Actions for Nature to Achieve the Sustainable Development Goals’, momentum has also been building for a global plastic treaty.3 See ‘Heading Towards a Global Plastic Treaty?’ and Global Plastic Treaty Dashboard.

Some major corporates join the call

A number of corporates have signed a pre-UNEA 5.2 manifesto, calling for the ‘United Nation Member States to commit to the development of a global treaty on plastic pollution’.5 The statement calls for an examination of the full plastic supply chain to make a circular economy work globally by ensuring common definitions and standards with a robust compliance structure – see below.

So why did some corporates sign up? They state that ‘a co-ordinated international response is needed, one that aligns businesses and governments behind a shared understanding of the causes of plastic pollution and a clear approach to addressing them’. These signatories are asking for a global set of aligned standards to which they can adhere; a level playing field for a circular plastic economy. It is a common set of global standards which will enable a meaningful change in the present rates of plastic pollution. Without it, corporates will seek opportunities for regulatory arbitrage, whereby management adopt an avoidance strategy and look to exploit loopholes by structuring their operations in areas with a lower regulatory requirement, seeking a competitive advantage.

Sceptics will argue that UN agreements are difficult to reach and when accomplished, the mix of interests of the Member States often means the final requirements are undemanding, therefore it’s a sensible strategy to endorse such a statement. But without a framework of regulations and standards, corporate interests will continue to dominate and pollution externalities will remain someone else’s problem.

20 brand owners and retailers have signed up. Of the top 20 fast moving consumer goods (FMCG) companies, eight are signatories, including three of the top five when ranked by revenue: Nestlé, Procter & Gamble and PepsiCo – see Table 1. 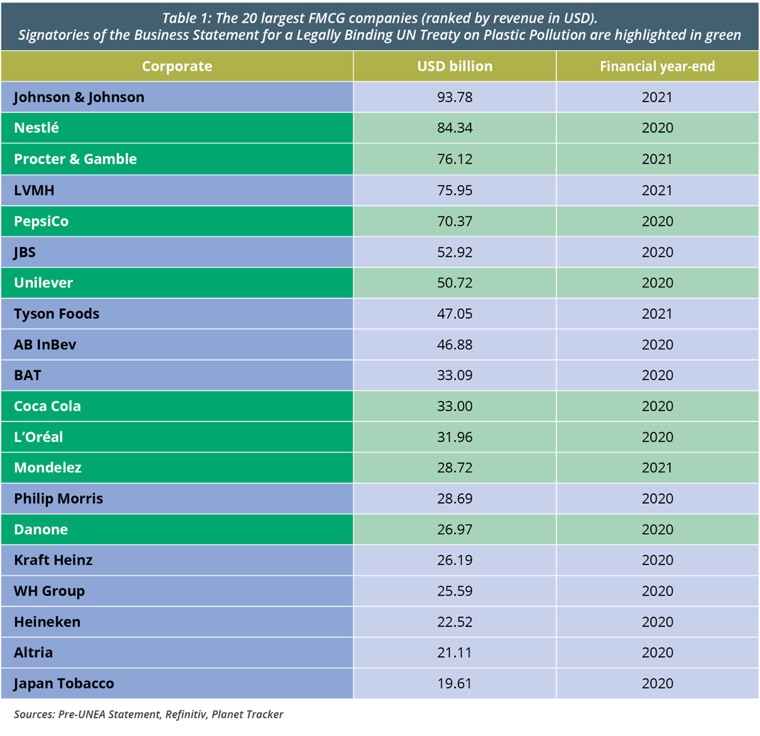 Some major retailers are also signatories. Of the top 20 listed companies ranked by revenue, we note that three support a global plastic agreement: Walmart (headquartered in the U.S.), Carrefour (France) and Tesco (UK). The list below excludes the largest privately listed retailers: Aldi, Association des Centres Distributeur E. Leclerc, Auchan IKEA,  Rewe Group and Schwarz Gruppe. Schwarz Gruppe, the owner of Lidl, the discount retailer and Kaufland, the hypermarket chain, is a signatory of the manifesto – see Table 2. 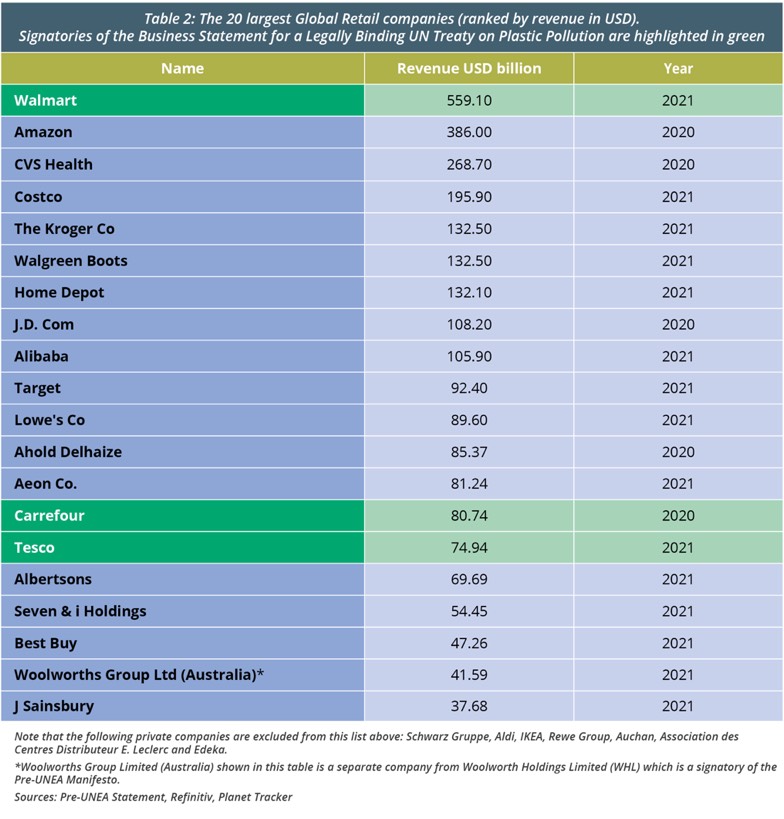 But the single-use plastic (SUP) producers are withholding their support – see Figure 1. Borealis, the Austrian joint venture owned by OMV (the listed Austrian oil & gas company) and Mubadala (the UAE sovereign wealth fund), is the only top 20 SUP producer that presently support this global treaty. For further details of the top 20 polymer producers please see ‘Policing the Plastic Producers’.

Where are financial institutions?
Although a total of 28 financial institutions have signed the manifesto, among the top 20 asset managers ranked by assets under management, there are only two signatories, Fidelity and Amundi – see Table 3. BNP, which ranks 24th by assets under management also deserves a mention as a signatory.

The reasons for the absence of so many of the largest investment managers is concerning. It is unlikely that they are unaware of the upcoming UNEA. It’s possible that they could be swamped with other demands, such as transitioning their portfolios to a net-zero world, but some additional resourcing would solve this problem. Maybe these financial institutions believe the call on UN Member States for a legally binding instrument on plastic pollution is multi-faceted and therefore too demanding? But financial institutions were given a lower hurdle than other manifesto signatories and merely had to be ‘committed to responsible investment practices that support a circular economy for plastics’.

Perhaps it that they simply do not care enough about this environmental issue, or they feel it’s not their role to effect these changes? 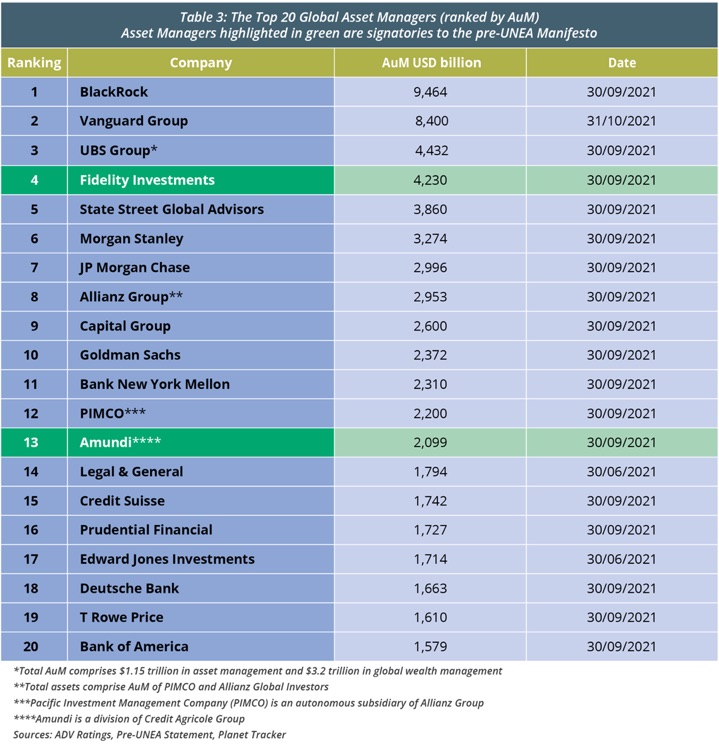 Clearly some of their financial competitors disagree with this view – achmea, Boston Common, DNB, Federated Hermes, Robeco, Rockefeller Asset Management for example. Although these treaty supporters are all members of the PRI Plastic Investor Working Group7, only one-third of their colleagues felt obliged to join them as signatories of the pre-UNEA Manifesto – see Table 4. 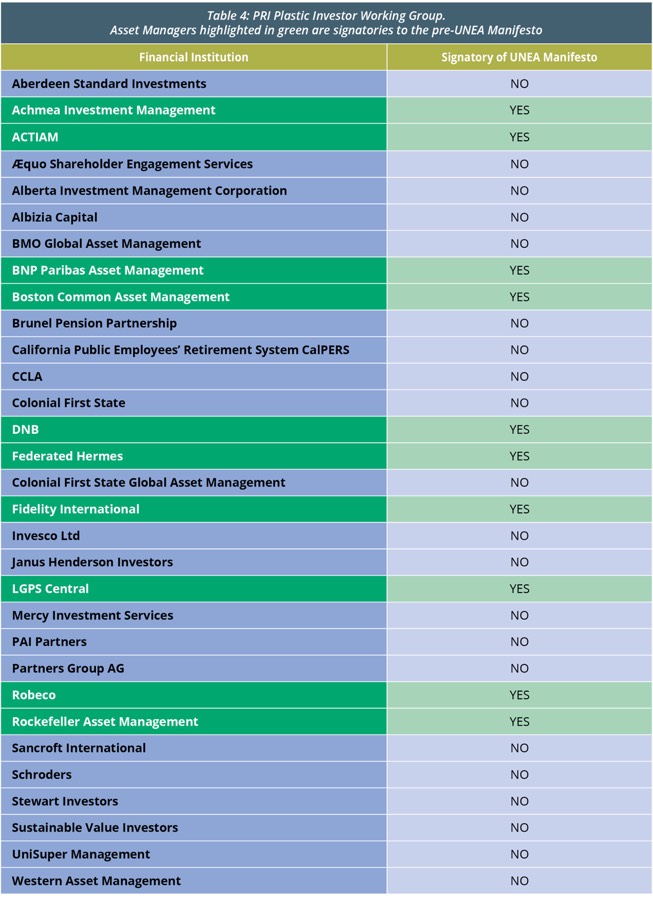 Another network which could reasonably be expected to support the UNEA plastic pollution treaty are members of the Alliance to End Plastic Waste.8 Presently it has 66 members across the plastics value chain.9 However, only five (8%) support this UN initiative – see Table 5. Notable absences include oil majors such as ExxonMobil, Shell and TotalEnergies; chemical giants such as BASF, Dow and Sumitomo Chemical; petrochemical and plastic producers such as Formosa Plastics, LyondellBasell and Sinopec and conglomerates such as Reliance Industries and SABIC.

On the one hand, there is considerable momentum building for a global plastic treaty among UN Member States. Some of the world’s largest FMCG companies and retailers are calling for the same and, where these giants lead, others may follow. On the other hand, one of the key components of such an initiative, the plastic producers, is largely absent.

The largest financial institutions are also failing to support this global agreement. Can they credibly demand of the management teams in which they are invested that they tackle plastic pollution when only two of the top 20 can commit to responsible investment practices that support a circular economy for plastics? Investors should take note and question whether these absent asset managers can plausibly claim sustainability or ESG credentials.

3 CIEL and EIA: Comparison Table on the Potential Resolutions on Plastic Pollution to be Adopted at UNEA 5.2

5 Manifesto: The Business Call for a UN Treaty on Plastic Pollution