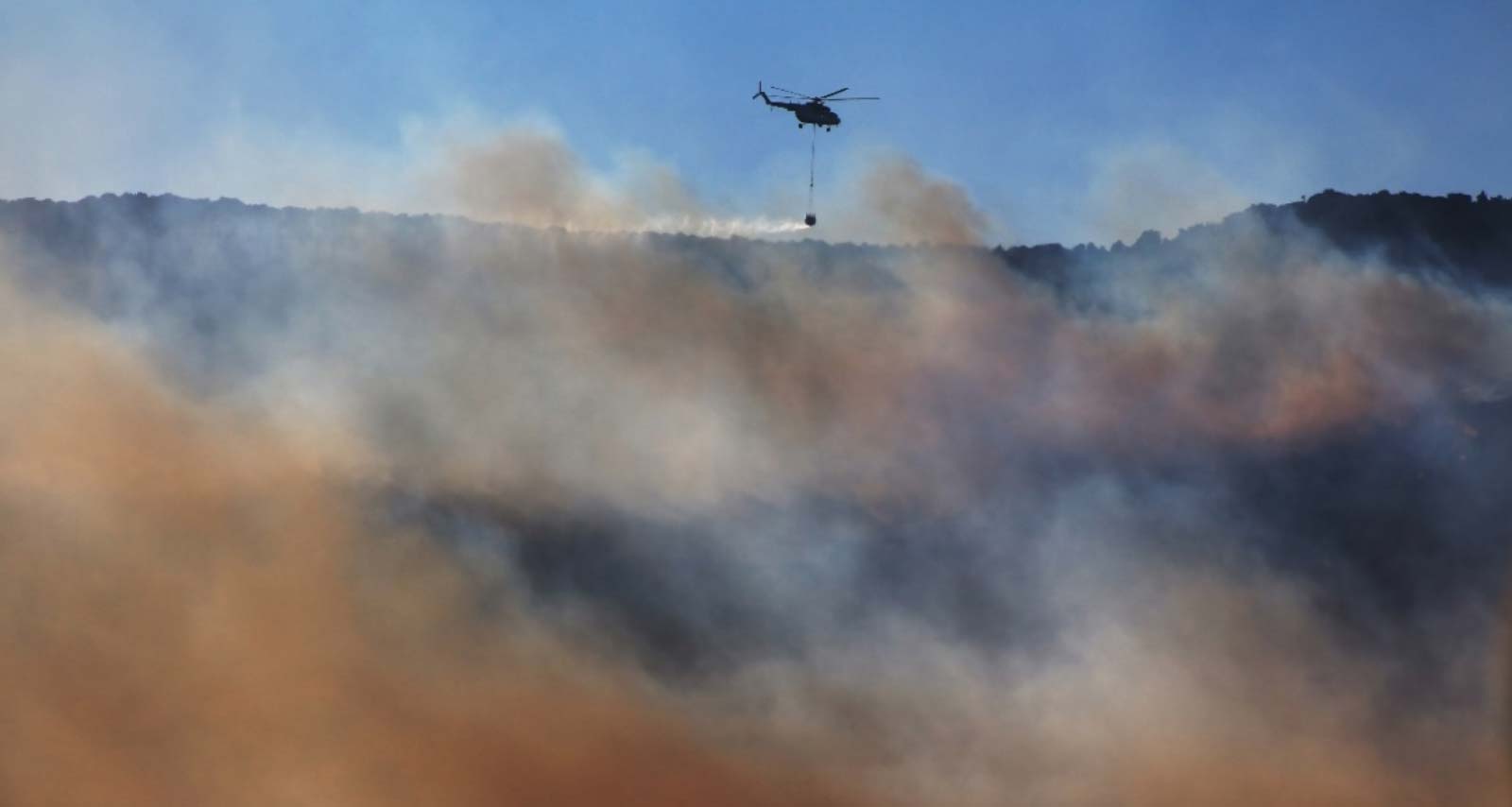 This month, Argentina’s government agreed terms with bondholders, led by BlackRock, to restructure $65bn of sovereign debt at 55 cents on the dollar value. Next in line is The International Monetary Fund (IMF) with negotiations set to start this week to replace the defunct $57bn IMF Stand-By Arrangement issued in 2018.

With net foreign reserves at approximately $7.8bn, compared to $13.4bn in March, and with a fiscal deficit forecast to reach 8.5% of GDP, Argentina needs to convince investors and the IMF of their debt-paying capacity with a credible strategy capable of generating foreign reserves to service historical and new debt liabilities.[i]

Negotiators from all parties are likely to assess the macroeconomic contributions of Argentina’s agricultural sector towards this strategy.[ii] From 2010 to 2019, 56 per cent of Argentina’s total exports were agriculture-based products with soybeans, including oil and oil cake, representing 24% of total exports.[iii] Soy sector exports generated $15bn in trade receipts in 2018.[iv]

By generating balance of payment receipts which, in turn, bolster foreign currency reserves, agricultural exports are critical to Argentina’s debt-paying capacity. However, in the short- to mid-term, climate and natural capital impairments are lowering agricultural production forecasts.

As the LSE and Planet Tracker showed in an award-winning report earlier this year, it is now imperative that natural capital factors are fully incorporated into the issuance, stewardship and restructuring of sovereign debt.[v] Argentina is a case in point.

Crop losses resulting from floods and drought have cost Argentina over US$7.6bn from 2017 to 2019. In May 2020, investors will recall Argentina defaulted after missing $500mn of interest payments on $67bn of outstanding sovereign debt.

Public and private debt negotiators would be well advised to account for Argentina’s mounting natural capital and wildfire crisis in the vital months ahead as debt restructuring continues whilst two issues, drought and wildfire, continue to heavily impact the agricultural outlook.

Drought is a familiar constraint in Argentina with well documented devastating effects on the local economy. The previous three drought events in 2008/09, 2011/12 and 2017/18 resulted in soybean harvest losses alone of US$3.9bn, US$ 2.7bn and US$4.6bn respectively.[vi]

According to the Bolsa De Comercio de Rosario (Rosario Board of Trade), as of early August, harvest areas for 2020/21 compared to 2019/20 for wheat and soy had declined by 300,000ha and 100,000ha respectively. The exchange has also recorded the lowest level of stored water available for irrigation in the last decade. These changes triggered revisions in production forecasts for wheat from 21/22 Mt to 18/19 Mt and for soybean from 56.6 MT to 50.7 Mt.[vii]

Drought is also impacting grain trade. Water levels of the Paraná River particularly at the trading port of Rosario are impairing shipping access and supply chains. From January to April, the Rosario Grain Exchange estimated $244mn of grain losses due to the poor navigability. As a result, soybean exports have fallen 23 per cent in July year-on-year, while corn exports have been reduced by 13 per cent as a direct impact of shipping disruption.

Under these circumstances’ potential drought-related soybean and wheat export losses in 2020/21 are forecast to exceed $2.7bn.[viii]

Major expansion of cattle ranching followed by soybean cultivation have been cited as catalysts for the fires in Argentina.[xii] Data from Global Forest Watch estimates that wildfires in Argentina’s Paraná Delta, regionally the highest concentrations of fires in the country, cover 90,000 hectares.

The comparatively low physical scale of these fires should not be overlooked. From 1st January to 20th August the country recorded the highest number of wildfires globally with 6.2% of all fire events – see Figure 2.[xiii]

Despite the small land area affected, the mid-term natural capital implications of these fires are significant. Wildfires clear natural forest cover and alter underlying soil dynamics including soil organic matter[xiv] and water absorption. This is important as its impacts nutrient cycling and biological properties of soil that supports crop production. [xv] 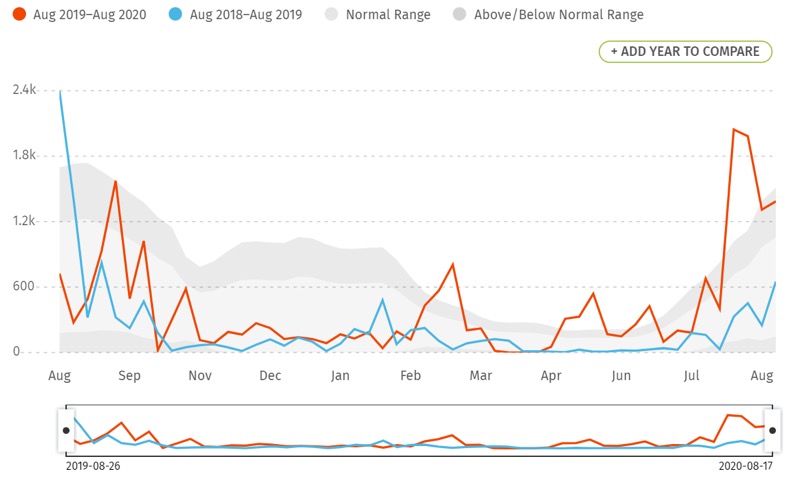 This is important as its impacts nutrient cycling and biological properties of soil that supports crop production. [xvii]

In 2016, Argentina’s National Agricultural Technology Institute found that on one hectare of the Gran Chaco, rain absorption rates per hour for high quality forest cover were up to 300mm, for grassland 100m, and for planted soybean only 30mm.

In normal circumstances, higher soil moisture acts as a risk mitigator for wildfires. Instead, the current arid conditions are exacerbating wildfires spreading through the major soybean producing regions compounding forecast drought-related losses – see Figures 2a and 2b. 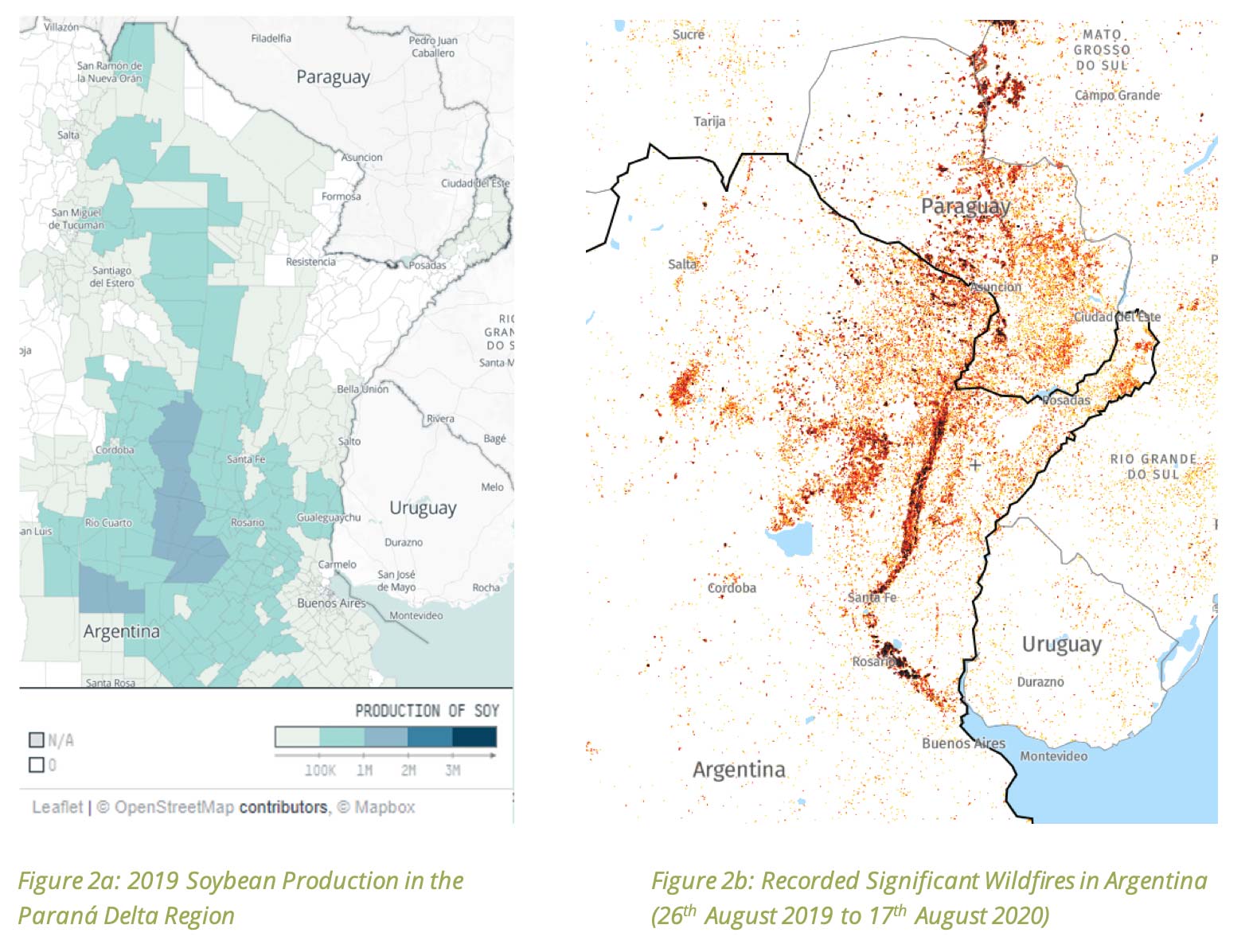 Looking to the future

These same lessons apply to Argentina.

Sovereign investors and the IMF are heavily incentivised to demand a clear and credible pathway to achieving zero deforestation, in turn, bolstering Argentina’s mid-term attractiveness for investment.

In the weeks and months ahead, negotiators of the current debt restructuring should therefore use the opportunity to leverage government commitments to support a zero-deforestation agenda and tackle the all-important issue of changes in land use.

[iv] Pinzón A and Robins N with McLuckie M and Thoumi G (2020) The sovereign transition to sustainability: Understanding the dependence of sovereign debt on nature. London: Grantham Research Institute on Climate Change and the Environment, London School of Economics and Political Science, and Planet Tracker.

[v] Pinzón A and Robins N with McLuckie M and Thoumi G (2020) The sovereign transition to sustainability: Understanding the dependence of sovereign debt on nature. London: Grantham Research Institute on Climate Change and the Environment, London School of Economics and Political Science, and Planet Tracker.

[xii] Goñi, U (2020) ‘Everything is burning’: Argentina’s delta fires rage out of control