The fashion industry has an environmental problem.

The global fashion industry has a significant problem, with both the manufacture and disposal of its products causing unsustainable environmental burdens. Today the fashion industry is estimated to account for around 2.1 billion tonnes of global carbon emissions per year and 20% of global wastewater. 73% of textile waste ends up in landfill with only 1% recycled into new garments.1 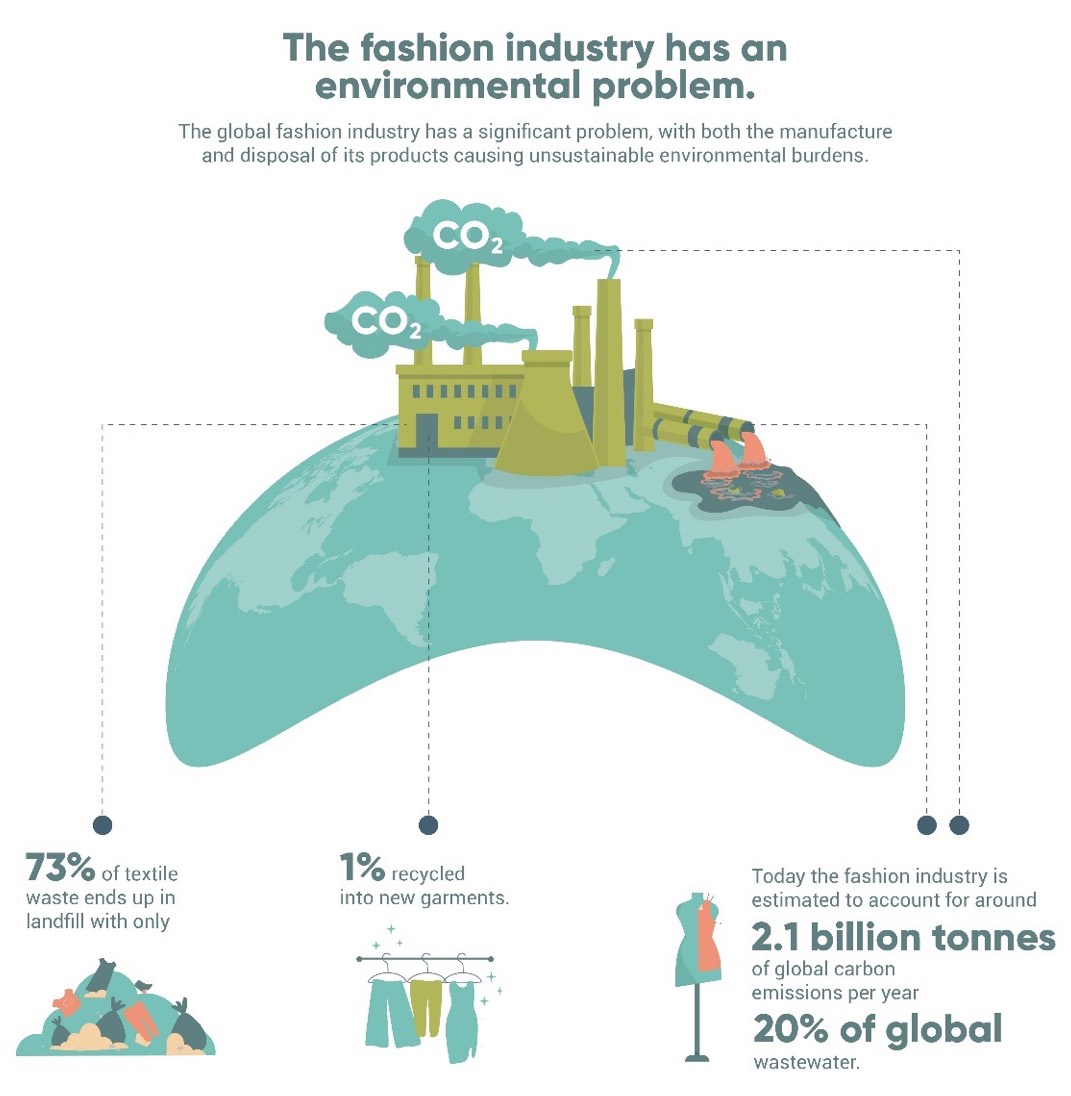 Growing demand for clothing is being driven by an increasing global population, increasing wealth and the move to fast fashion, which promotes overconsumption and a use and discard attitude – see Figure 1 . These challenges mean the industry is moving in the wrong direction to meet its target of achieving net zero by 2050. 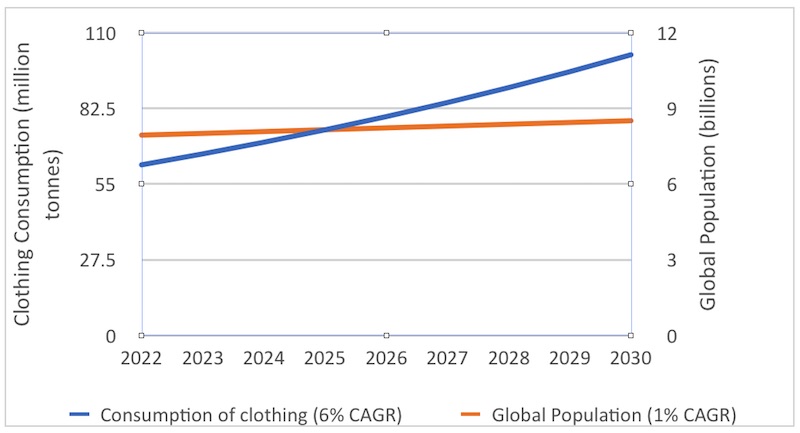 Although efforts to make clothing more long-lasting and to boost recycling of used clothes are important, it is also critical for fashion to address its overconsumption addiction in higher income countries. Over the past 15 years, the amount of clothing purchased by the average consumer in higher income countries has increased by 60% while they keep each item half as long.2 To move the industry to a more sustainable footing will require this overconsumption to be reversed, or for the environmental impacts of such overconsumption to be mitigated. A move away from continuous growth would require a radical reset in the mindset of brands and investors, while mitigation would need as yet unproven technologies. Proponents of digital fashion suggest that it offers one potential answer to this conundrum.

What is digital fashion?

Digital fashion is the design and production of garments which exist in a digital rather than physical format. This means that the garment is only available for use or viewing on a computer.

Digital garments allow incredible flexibility for designers. They can use fabrics or shapes unachievable in the real world to create totally unique looks and fully explore their creativity (for instance combat boots made out of cut crystal3).

The concept of digital fashion can take a variety of forms. Most simply, a number of brands have teamed up with video games to produce skins and collectables for use in games. This is a particularly attractive market with a young audience and an estimated market size of $40bn.4

Moving beyond gaming, a variety of companies today (DressX, Replicant) retail digital garments for use on social media profiles. The garments can be added to the consumer’s photos (the process can take a couple of days) allowing them to look like they are wearing them. These digital garments are often available in limited numbers with owners purchasing them as a non-fungible token (NFT) allowing them to trade them on at a later date.

Looking further into the future, fashion has already started to explore the potential of the metaverse. The metaverse is an online computer-generated space in which users can interact with the environment and other users. In the metaverse, users are represented by an avatar which they can design and clothe. The concept of the metaverse is attracting a lot of excitement in the technology sector, with the suggestion that people will spend ever more time online in the future, with the distinction between their digital life and physical life increasingly blurred. Also see Planet Tracker’s ‘Forget the Metaverse, the Future is in the Natureverse’.

Although it is still early days for the metaverse, fashion has been relatively quick to experiment with the potential. The first Metaverse Fashion Week was held on the Decentraland platform in March 2022. This featured four days of events including a catwalk show (using human-cat avatars as models) by Dolce & Gabbana. The event has had mixed reviews, with reports of connections failing and low-quality graphics leaving some users underwhelmed.5

Can digital save fashion?

Of course, Digital fashion also suffers from none of the negative environmental impacts associated with the disposal of textiles. A digital file can be deleted if no longer wanted by a consumer rather than releasing plastic microfibres into the environment as currently happens. There is also no problem with the dumping or burning of unsold inventory by brands.

The financial impact could be significant from a move to digital

Analysis from Morgan Stanley has suggested that digital fashion could grow into a USD 50 billion industry by 20307, from a very low base today, roughly equivalent to three quarters of the market cap of mass fashion retailer Inditex. Although still relatively small compared to the multi-trillion-dollar physical fashion industry, it does represent a potentially meaningful new opportunity for brands.

As well as the sales opportunity, the impact on profitability for the brands of increasing sales of digital products could be very positive, with the production of digital designs requiring only the designer, some spend on software, and the energy costs associated with digital, meaning a potentially much higher profit margin.

Brands are already experimenting with digital

Acknowledging the potential in digital fashion, a range of major brands have already started experimenting in the new market. In September 2021, Dolce & Gabanna experimented with a digital and physical capsule show. The collection featured the auction of a range of unique items where winning bidders received both an NFT and also a bespoke physical version of the product. It also featured digital only products, such as “The Impossible Tiara” with winning bidders offered “experiential” bonuses such as private tours and tickets to couture shows. Overall, the show raised nearly USD 6 million in sales.

In December 2021, Nike acquired digital footwear designer RTFKT (pronounced Artifact). On the back of the deal, Nike launched their first digital trainer collection in April. Single pairs of the digital footwear sold for as much as USD 130,000.

Digital is no panacea

We do not see digital fashion as the answer to the industry’s environmental impact. Today digital products remains a niche part of the market. Analysis by EY suggests around 1 in 10 consumers have used digital currencies, experienced the metaverse, or purchased a virtual product.8 Although this proportion will likely increase, it is hard to see it driving a replacement of demand for physical in the near-term or longer term. People still need clothes, towels, bedding and so forth. We note that how quickly and how fully society engages with the metaverse remains an open question, especially given widespread reports about issues with the user experience. Should uptake be slow or not reach the levels envisioned by evangelists, efforts in digital fashion could distract from the necessary changes needed to the traditional industry if it is to become sustainable. Brands could delay making other changes by pointing to investments in digital fashion which, in reality, are never going to offset the ongoing impact of their physical activities.

An important question is also whether digital would reduce demand for physical or merely be a new supplementary market. People will continue to need clothes to wear for work, going out or sports. If digital merely offers a new avenue for spending on clothing, then it is unlikely to be a panacea for the challenges the industry faces in going green. Additionally, we note that allowing overconsumption online would likely normalise such behaviour, potentially making it more difficult to move the physical garment industry to a more sustainable model.

Growth in digital fashion sales could also exacerbate the social inequalities of the traditional industry. A move to digital would likely see even more of the value in the fashion industry captured within the global minority countries. If consumer were to shift significant spending volume to digital products there would be a drop in demand for physical items. With textile supply chains an important source of revenue for a number of countries in developing countries, such a move has the potential to bring pressure to bear on the livelihoods of many thousands of workers.

One potential offset to a shift of ever more value to the global minority countries is that digital can also be a democratizing force. Such a move will mean lower barriers to entry to the industry, as smaller designers will only need access to a computer to produce and market digital pieces. This could democratize the fashion world and reduce the power of traditional players. However, this is somewhat of a utopian view, with access to a computer and the skills to design a digital outfit remaining a pipedream for many labouring in fashion supply chains or dealing with fashion waste in developing markets.

To summarise, digital fashion offers an interesting new market opportunity for brands and one they would be wise to look to participate in. It should not however distract from the significant structural changes needed to the traditional fashion industry if it is to meet its goals to reduce its environmental impact. Reinvesting new digital profits into driving change in their physical operations would be a welcome strategy for the industry.