The World Economic Forum’s annual meeting in Davos, Switzerland, ended last week and the verdict is in – Everything is ESG – as the theme for this year’s annual meeting was ‘Stakeholders for a Cohesive and Sustainable World’.

BlackRock, the world’s largest asset manager with $7.4 trillion in assets under management, announced last month that “Climate Risk Is Investment Risk… As a fiduciary, our responsibility is to help clients navigate this transition”.

Then this month, while at Davos, BlackRock’s CEO Larry Fink wore a climate data-themed scarf when interviewed at Davos where each thread represented the annual average temperature for the globe from 1850 to 2018 (Figure 1). In his interview he said:

“We should not avoid the conversation about climate change. Climate change is now becoming an investment risk”. 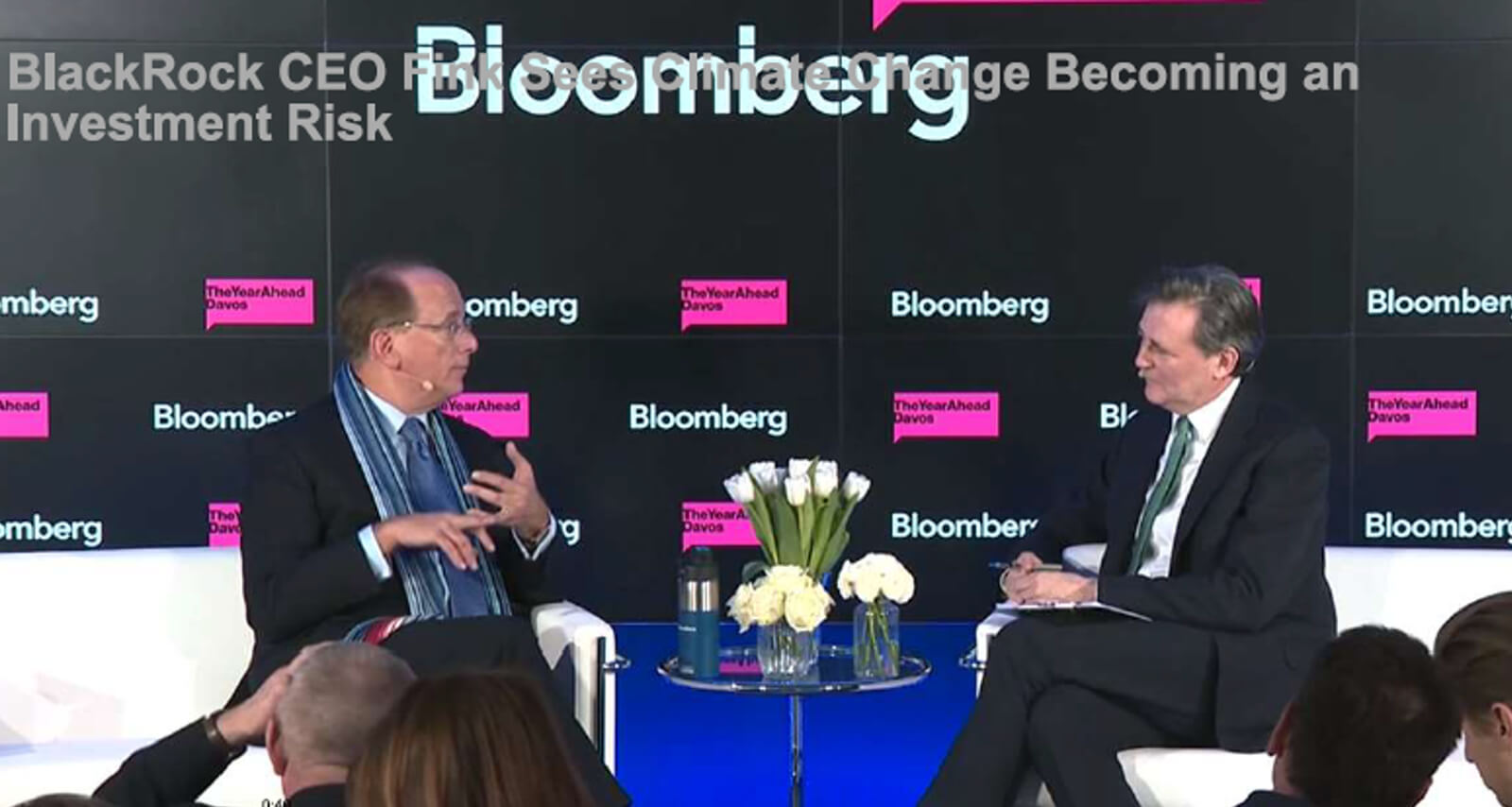 This year was the first time that environmental risks top the list of the WEF’s long-term ten-year concerns. According to the World Economic Forum, the top-five risks over the next ten years are extreme weather, climate action failure, natural disaster, biodiversity loss and human-made environmental disasters (Figure 2). 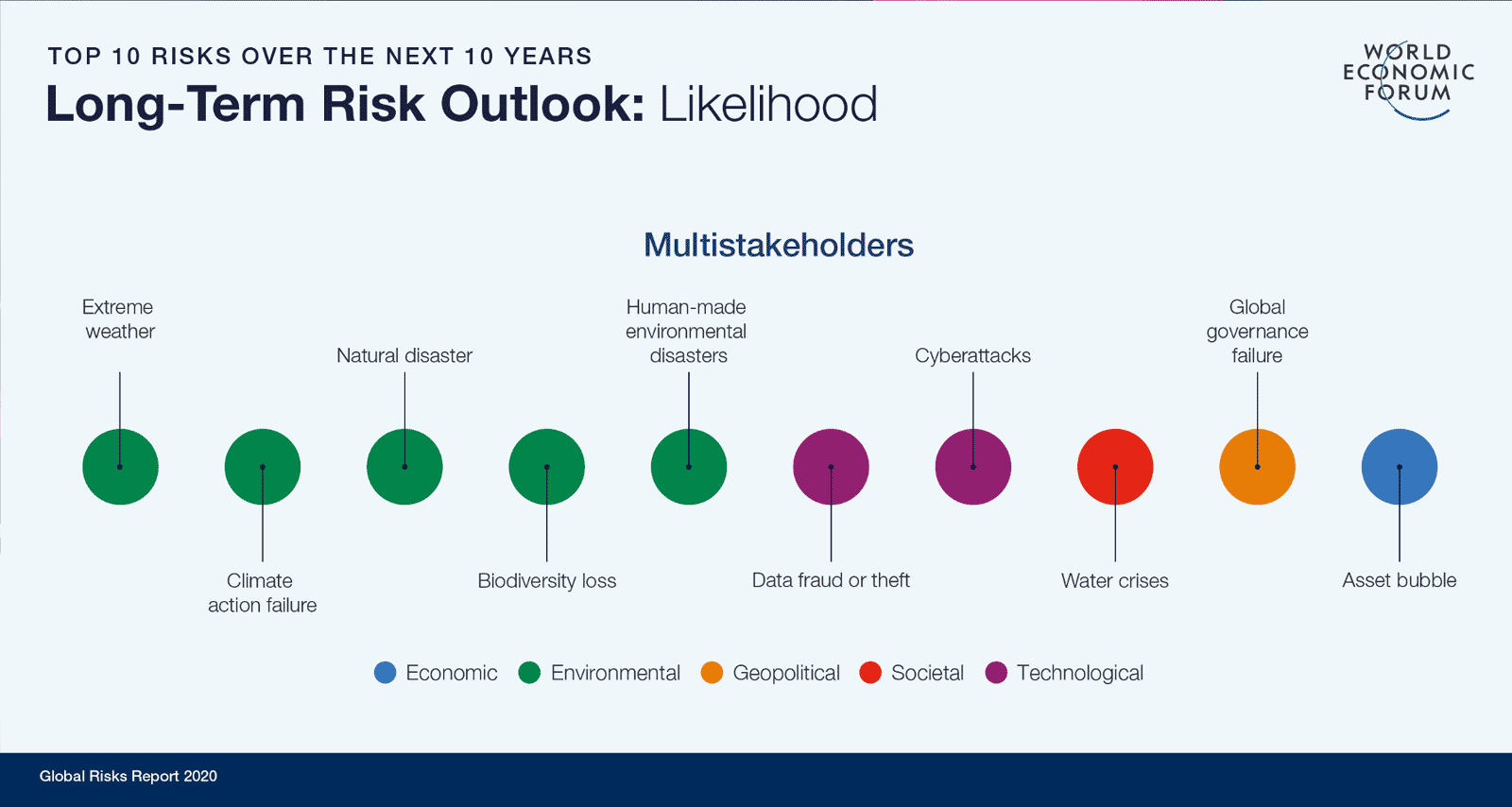 Yet across the pond, things look bleak, and for BlackRock too because of the U.S. Securities Exchange Commission’s proposal to curtail investor requests of the companies they invest in to address these same five risks – extreme weather, climate action failure, natural disaster, biodiversity loss and human-made environmental disasters – by limiting investors options to file proxies.

The SEC is proposing to decrease investor access to engage with the companies they own by significantly increasing barriers for proxy proposal submission and voting. Sure dull, yet critically important.

With the comment period ending 3 February 2020, many investors have supported raising the bar, making it more difficult for the them to engage with the companies they own.

But over 140 asset managers and asset owners, including New York State Common Retirement Fund, BMO, HSBC, AXA, Legal & General Investment Management, Wellington Management Company, Caisse des Dépôts et Consignations, Aberdeen, Aviva and many others, have signed on to a letter led by the Principles for Responsible Investor stating that “the proposed rules stand in direct contradiction of the SEC’s stated purpose, to protect investors.”

Investors who say climate risk is important to their clients now need to show that this isn’t just lip service.  Sign up here.

SEC Commissioner Jackson summed it best in his dissent last November when he said: “Whatever problems plague corporate America today, too much accountability is not one of them.”

The bottom-line is the following: investors can put on a scarf and pretend to protect themselves from the risks highlighted by the World Economic Forum, or investors can take their gloves off, get dirty, and work to mitigate these risks to the benefit of their clients… and the planet.

Stay up to date

For the latest updates direct to your inbox please add your details below. We will send out a regular mailing and your details will be kept according to our Privacy Policy.