Planet Tracker highlighted the lack of disclosure regarding deforestation risk in a recent report on Exchange Traded Funds (ETFs) and flagged three financial institutions that are responsible for around 70 per cent of the total ETF market (Blackrock, Vanguard, and State Street). 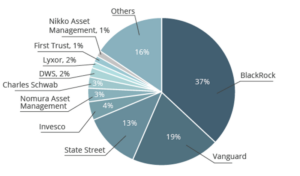 Last week, Larry Fink, founder and CEO of Blackrock, wrote a letter to CEOs of the companies in which Blackrock invests and another to the company’s clients. Both these letters discuss in detail the various approaches that Blackrock intends to take to climate risk, sustainable reporting and a variety of other related issues.

The client letter mentions ‘sustainable’ 17 times and ‘sustainability’ 25 times and his letter to CEOs mentions these words 11 times and 17 times respectively.

But the number of times deforestation gets a mention in either letter? Zero.

Addressing deforestation is an essential part of addressing climate risk

This omission is surprising. Deforestation is a crucial factor in climate change. It accounts for nearly 15% of all greenhouse gas emissions — similar to the world’s entire transport sector.[i]

In 2014, the IPCC noted that ‘Reducing deforestation and forest degradation rates represents one of the most effective and robust options for climate change mitigation, with large mitigation benefits globally.’[ii]

Reforestation may be one of the key ‘natural climate solutions’ in achieving the Paris Agreement target of holding global warming below 2%. In the same 2014 report, the IPCC estimated the overall potential for ‘reforestation and forest restoration’, particularly in ‘tropical and subtropical climates’, as ‘large, reaching about 10 GtCO2 per year[iii] – nearly 20% of current total emissions.[iv]

Given these simple facts it seems odd that deforestation does not get a single mention.

63% of financial institutions do not have a published deforestation policy

However, the recent Forest 500 report by Global Canopy highlights why deforestation may have been missed. It seems that Blackrock does not have a policy on deforestation.

Unfortunately, Blackrock is not alone. 63% of the 150 financial institutions assessed in the Forest 500 report do not have any deforestation policies and 81% (122/150) have not published an overarching deforestation policy covering all four high deforestation risk commodity groups (beef, soy, palm oil, and timber).

In fact, policies relating to deforestation risk arising from beef and soy are the least common – only 20% of financial institutions have a policy covering cattle, and only 24% have one covering soy.

It is worth pausing at this point to let those statistics sink in. Deforestation has been known as a climate risk for decades (e.g., headlined in Time magazine in 1989) but two-thirds of the financial institutions surveyed have chosen not to publish a policy regarding deforestation.

Financial institutions run on policies. They have policies to prevent money laundering, policies for onboarding clients, policies on ethical behaviour, policies for travel and expenses. If senior management thinks something is important there will be a policy about it and, if it is something that matters to their reputation, they will publicise the policy’s existence.

So it is reasonable to presume that these financial institutions haven’t published a deforestation policy because they don’t have one, and it is not a big stretch to assume this means that the management of these companies does not regard deforestation as something worth managing (at any level of the business).

This policy gap matters. The Forest 500 report shows that financial institutions with no deforestation policy have provided $2.7 trillion of financing into the most influential high deforestation-risk companies, and Blackrock, Vanguard, and State Street are responsible for nearly 40% of the total. 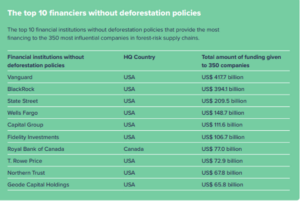 It is particularly ironic to note that Blackrock’s letters were published just after the close of 2020 –set as the year in which a number of ‘net zero deforestation’ commitments would be achieved:

Blackrock is far from alone in missing the (deforestation) wood for the (climate) trees. Deforestation is a fundamental driver of climate change and is also responsible for much of the biodiversity loss occurring worldwide. This is particularly the case in Latin America, and the beef and soy production industries in Brazil and Argentina lie at the heart of that process.

Until all financial institutions make preventing deforestation an explicit policy focus, the environmental damage caused by the beef and soy industries, and the supply chains they underpin, will continue.

Stay up to date

For the latest updates direct to your inbox please add your details below. We will send out a regular mailing and your details will be kept according to our Privacy Policy.