Coca-Cola and PepsiCo are the world’s top plastic polluting brands and therefore their recycling targets deserve scrutiny. We believe that investors should have little confidence in these goals and financial institutions should share the blame for this.

The world’s top plastic polluters
In 2021, under the Break Free From Plastic (BFFP) eco-friendly umbrella, 11,184 volunteers in 45 countries across six continents came together. They analysed and classified more than 330,000 pieces of plastic pollution. Coca-Cola and PepsiCo emerged as the most polluting brands, with 19,826 Coca-Cola plastic pieces found in 39 countries and 8,231 Pepsico plastic pieces found in 35 countries. And while Coca-Cola has retained its top brand polluter position for the fourth year in a row, PepsiCo has never been far behind. Every year, PepsiCo has been in the top three plastic polluters since the BFFP started its endeavour in 20181 – see Table 1. 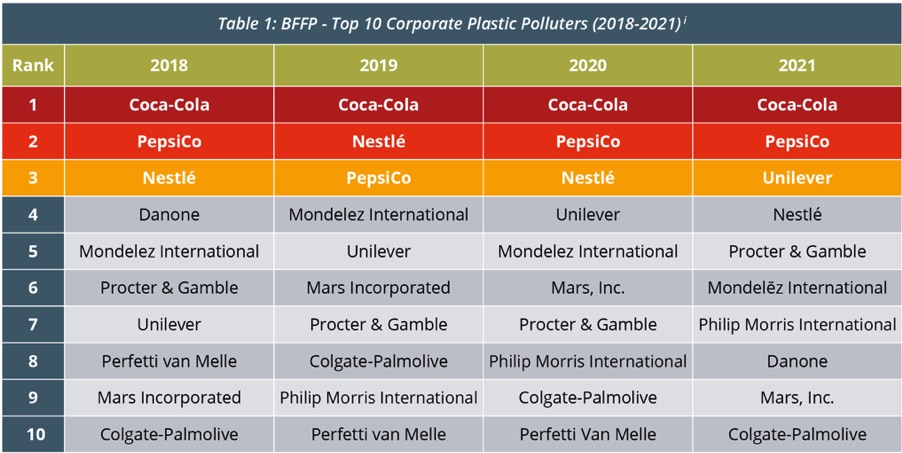 Examining goals and track records
Since BFFP’s first brand audit report, both companies have increased their recycling ambitions. In its 2018 ‘World Without Waste Report’, Coca-Cola announced a target to use at least 50% recycled material in their packaging by 2030.2

In its 2020 ‘World Without Waste Report’3, the company reiterated its goals and, in 2022, issued a press release stating, “by 2030, the company aims to have at least 25% of all beverages globally across its portfolio of brands sold in refillable/returnable glass or plastic bottles” and “use 50% recycled material in our packaging by 2030”.4

In 2021, not wanting to be left behind, PepsiCo updated its plans to similarly cut virgin plastic per serving by 50% across its global food and beverage portfolio, using 50% recycled content in its plastic packaging by 2030.5

However, Coca-Cola and PepsiCo have a long history of both missing and moving their recycling targets. In Figure 1, we show how these targets evolved and grew even though they were never accomplished. For further detail, please see “Beverage Container Recycling” by As You Sow or “Talking Trash” by Changing Markets Foundation. 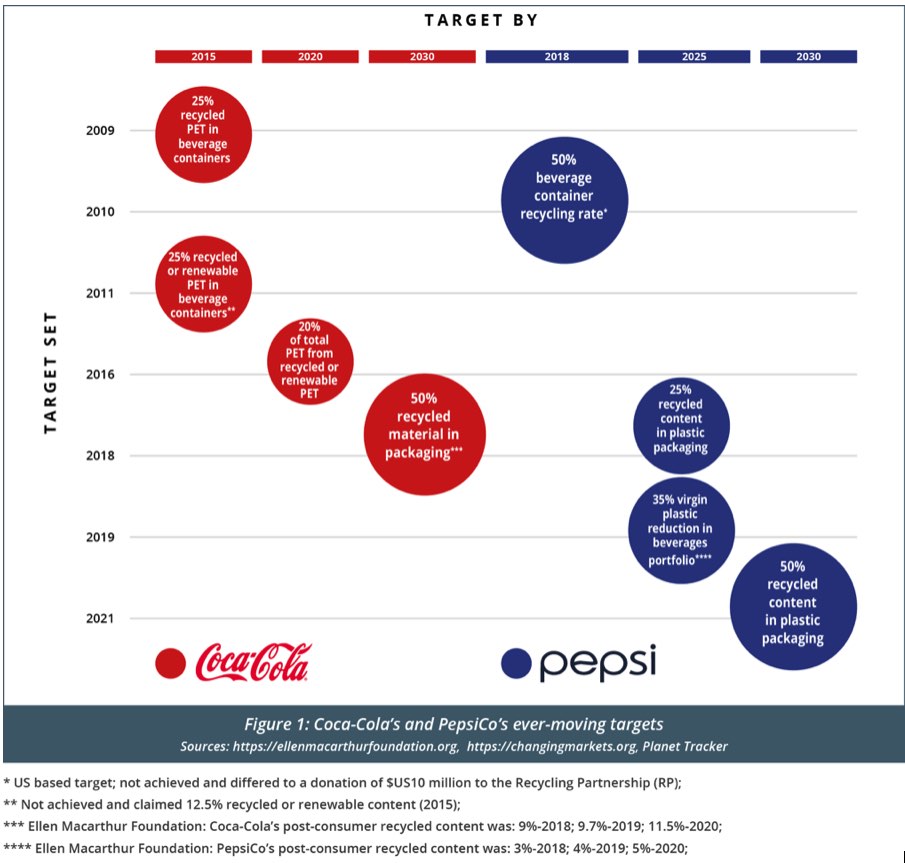 Furthermore, according to the Changing Markets Foundation, Coca-Cola is the top performer among the consumer goods groups in missing its own targets.7 With such a poor track record, one might wonder if Coca-Cola and PepsiCo take these targets seriously. Are they simply part of these companies’ marketing strategies? And if they do take these goals seriously, what is their excuse for repeatedly failing them?

Are Coca-Cola and PepsiCo likely to meet their new targets?
Clearly, neither company is confident of meeting their latest goals as they have packed their sustainability targets with caveats. Coca-Cola warns that due to the nature of these statements, their “actual results could differ materially from present expectations or projections”.

In line with this cautious approach, in its latest sustainability report and subsequent press release9, ludicrously, Coca-Cola identifies 47 risks that could lead to the unfulfillment of the sustainability targets – see Figure 2.10 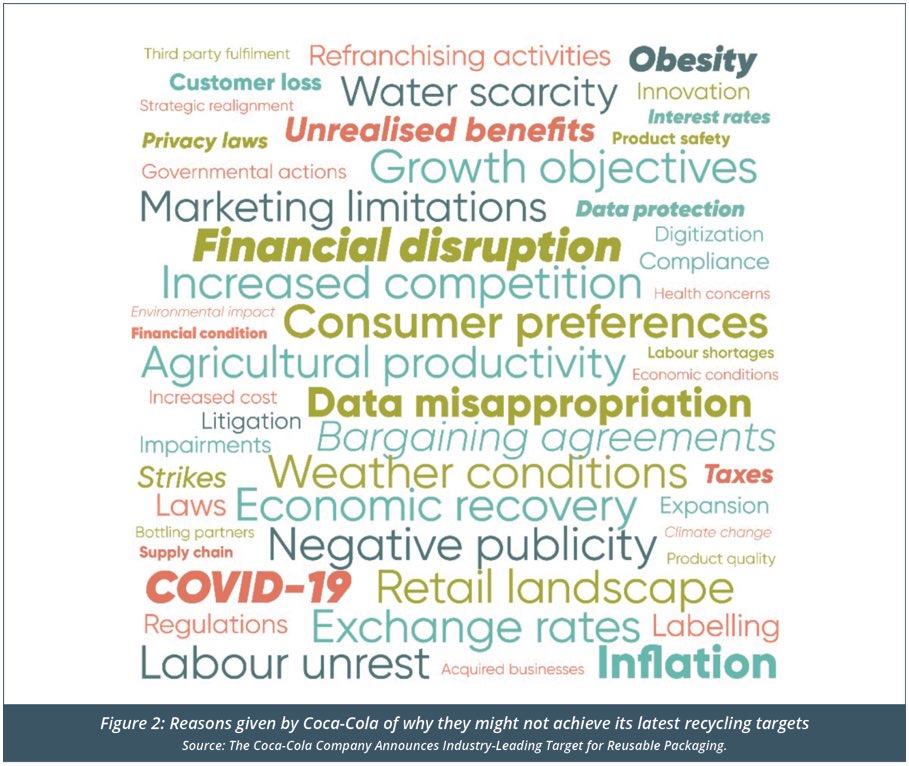 If Coca-Cola does not achieve its sustainability targets for any reason (including but not limited to the ones above), their report states that it “undertakes no obligation to update or revise any statements regarding those targets publicly”.

PepsiCo has a smaller list of excuses, but it still appears well-protected in case of another missed sustainability target. In its updated plans published in “PepsiCo Announces Strategic End-To-End Transformation: pep+ (PepsiCo Positive)“, PepsiCo identifies 16 risks that ‘could cause actual results to differ materially from those predicted in such statements’.11 – see Figure 3: 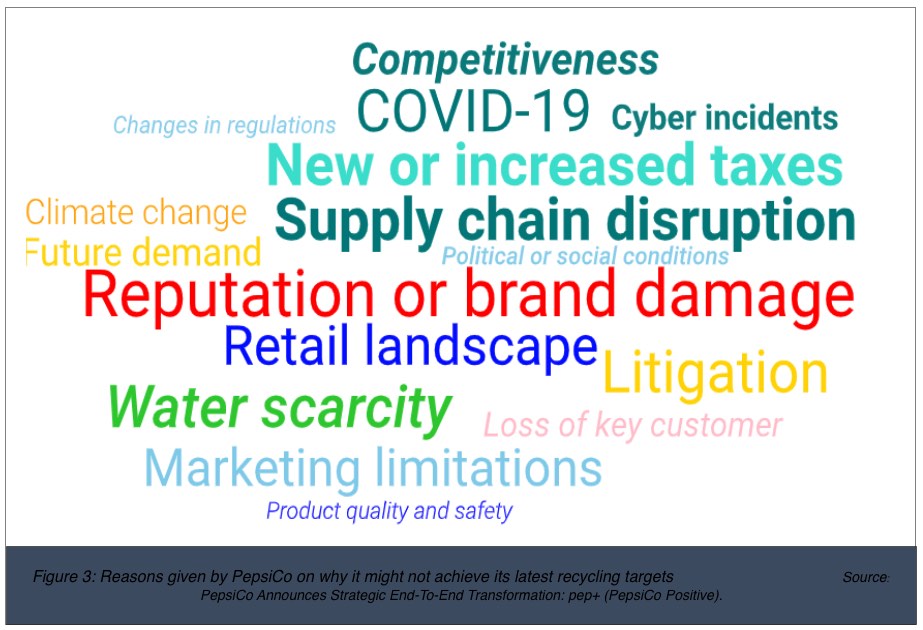 Of course, Planet Tracker is not a party to private meetings between institutional shareholders and executives, but we are able to examine voting patterns at AGMs.

By analysing voting data provided by Insight Proxies, it shows that the top 20 investors in Coca-Cola and PepsiCo do not view such sustainability issues as a priority. For both companies, there has only ever been one proxy vote to create an environmental report. This was on a tangential proxy vote in 2019 regarding whether PepsiCo should create a report on pesticide management. Among the top 17 shareholders of PepsiCo at the time of the 2019 vote, 15 voted against the introduction of this report – see Table 3: 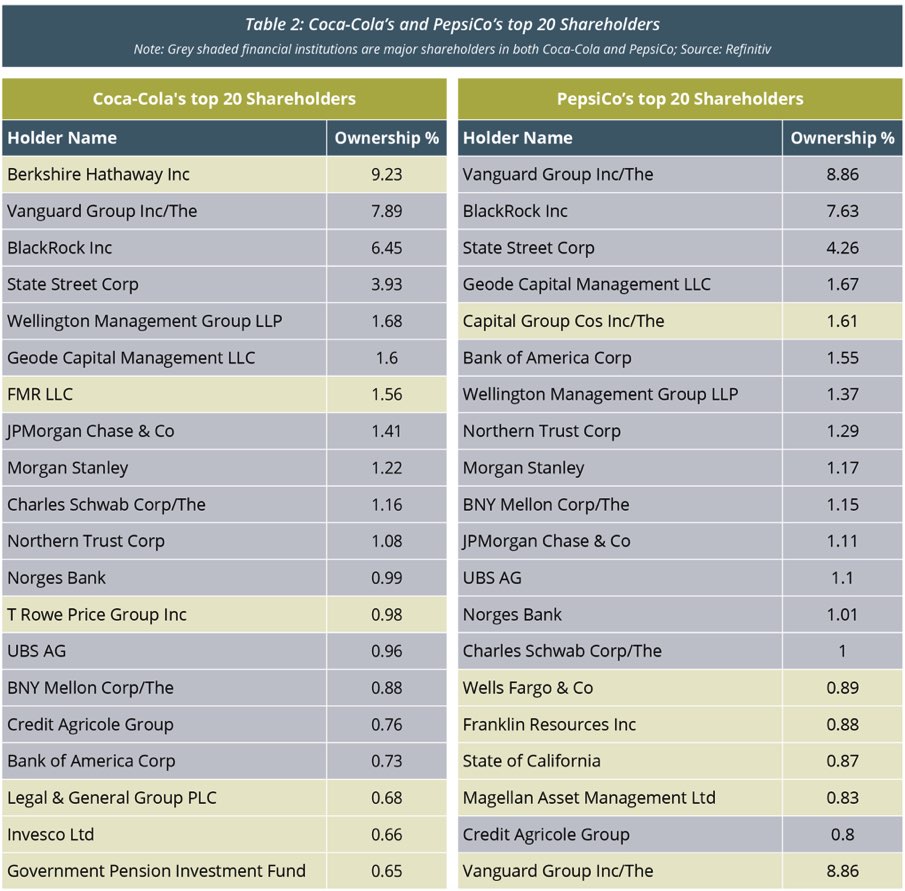 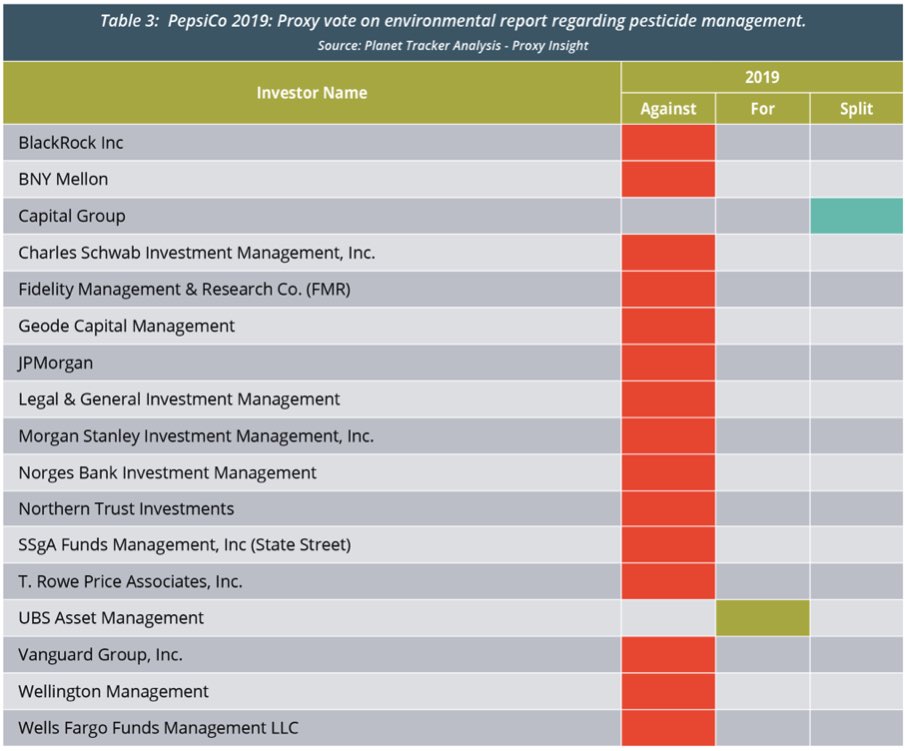 Moreover, 13 of those voters are among the top 20 shareholders of Coca-Cola, and 11 of them continue to be among the top 20 shareholders of PepsiCo. There has never been a shareholder vote submitted on plastic pollution for either company and for all US companies there have only been eight proposals submitted on plastic pollution at seven companies since 2018. Based on this analysis, a lack of challenge by major institutional investors over moving sustainability targets can be confidently anticipated.

The credibility gap
The world’s two largest plastic brand polluters have barely credible recycling targets. If past performance is an indicator of future performance, then Coca-Cola and PepsiCo should be expected to miss their sustainability targets. However, there should be a high degree of confidence that a failure to meet the latest target will not stop the issuance of new goals.

Two weeks ago, 175 nations approved a resolution at the UN Environment Assembly (UNEA-5) to end plastic pollution and create a legally binding treaty by 2024.13 In contrast, the two top polluting plastic brands have recycling targets which look barely credible. Financial institutions invested in these companies have a duty to demand robust goals which stand up to scrutiny. When sustainable targets are repeatedly missed, the company should be punished; it shines a light on the management team. Sustainability goals should not be used as publicity stunts.